GET READY FOR BUNDLES OF TRUNDLES! 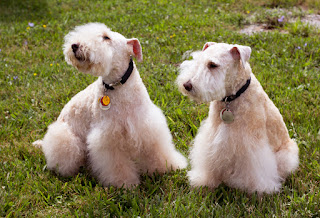 Greetings from your devoted Gallery One Patrons of the Arfs, Clancy and Shayna, and two of our friends known as Push and Pull.

Because you are a client of Gallery One, we have decided to let you in on a little-known secret before it makes the national headlines.

Now ask yourself, have you ever found your family dog barking at something that you cannot detect? He will stare intently at something unseen and unheard by you and bark with wild abandon. (And, when this happens, have you admonished him to quiet down, thinking that there is nothing there?)

Fear not, we understand that you cannot perceive many of the things that we dogs are able to detect. It’s just that our eyes, ears and wet noses are far more keen than those of our humans. A human typically has 5 million scent glands. Depending on our breed, we dogs have more than 125 million! We recognize moving objects better, and we also have the ability to see in low light. And us dogs can generally hear four times the distance of a human.

Now mind, this is not bragging. We are telling you this in order to illustrate the point of this week’s blog. Many times when we bark, it’s to tell you that we have spotted a Trundle (unbeknownst to you).

What, you ask, is a Trundle? Probably the human most knowledgeable about Trundles and their customs is artist Dean Morrissey. He is, as evidenced by his highly detailed artwork, an incredibly perceptive artist, and he has been seeing Trundles ever since he was a youngster. And having earned their trust over the years, he has been able to convince a number of them to pose for portraits, a feat previously unheard of. That Dean is certainly a charmer.

Trundles, he tells us, are magical little creatures that hide in plain sight. He explains: “Trundles inhabit homes and barns and shops in the real world. Preferring to stay out of sight, they sleep up in the eaves or in cabinet drawers. They are virtually invisible in a cluttered room.

“A fully-grown Trundle can stand up under a bed without hitting his head. Their purpose is a good one. They quietly go about helping their host in many ways. They sweep up in the middle of the night, secretly finish up bookkeeping, haul firewood and repair broken windows and leaky pipes. They are very appreciative of their hosts and become indispensable after a while. Very few people have actually seen a Trundle although many people have them as boarders. They are native to The Great Kettles, a magical Chain of Islands across the Sea of Time.”

Two such Trundles, Push and Pull, are shown above as rendered by Dean Morrissey. Shown here are Billy Blue Sky and His Magical Bow Tie and Snappy Argyle.

Dean will be making his annual Gallery One holiday appearance in early December, and he’ll be bringing a Bundle of Trundles with him! Be among the first to see them, and take home your very own Trundle.

Check this Blog for dates and times!

Clancy & Shayna
(Your Patrons of the Arfs)
Posted by Gallery One at 12:28 PM