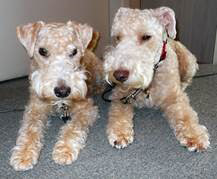 Shayna here. As Gallery One’s “Patrons of the Arfs,” Clancy and I rub elbows (and noses) with dozens of famous artists. To us, they’re just regular humans (only exceptionally talented). To our folks, they’re part of the family. But I digress. We know and love them, and once you get to know them as we do, you will too. So let’s all get better acquainted with this week’s ArtSmartz.

Posted by Gallery One at 4:43 PM No comments:

It's all in the details!

Art – you can look at art again and again and spot hidden details you never noticed. That gave Shayna and me an idea. We thought it would be fun to go outside in camo and see if our folks could find us. It would have worked too, had we made it past this flowered rug. So we thought it would be fun to test your powers of observation and see how many details you can spot in the artwork described in this week’s installment of ArtSmartz. (If you get stumped, don’t go chasing your tail over details; we’ll post the answers next week.)

Posted by Gallery One at 1:05 PM No comments:

It's time to face the music!

“A painter paints pictures on canvas. But musicians paint their pictures on silence.” - Leopold Stokowski

And sometimes, artists paint music on canvas. So this week, Shayna and I thought it would be fun to explore artwork that celebrates music! (And that’s me, serenading Shayna in the picture shown here.)

Posted by Gallery One at 1:22 PM No comments:

Shayna here. Being a public figure, I understand the fascination that others have with us luminaries. So Clancy and I decided that this week’s installment of ArtSmartz would be about famous female artists. (OK, I decided and bribed Clancy.) Be forewarned: HE gets to pick the topic another week. . .Boys!

Posted by Gallery One at 3:37 PM No comments: