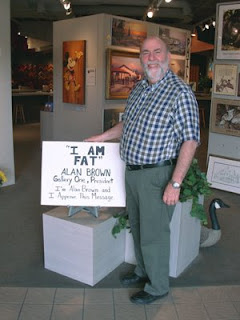 I have a problem!

I can no longer fit into my Speedos. Restaurant booths are getting smaller and smaller. My clothes keep shrinking. And my bath towel won't go around me anymore.

Actually, the problems began when I was eight. Back then I looked so scrawny that my mom took me to the doctor complaining that I needed pills to help me gain weight.

I think they worked.

In recent years I have been on low carbs and no carbs. I've been a vegetarian. I've downed Slim Fast. I've tried South Beach and North Beach. I've eaten grapefruit, watermelon, cabbage soup and tomatoes. Perhaps my problem is that I've eaten all of the above at the same time.

Now is the time for me to get serious. I'd love to lose 50 pounds. I need to fit into my tux for a September wedding. I want to turn back the clock.

So I've joined the Nutrisystem plan and now I have a pantry full of little packages of dried stuff. I feel like an astronaut. A fat astronaut.

Yesterday was my first day. I reconstituted, microwaved, ate and drank. It wasn't bad. I'll weigh in next week and let you know how I am doing.

AB
Posted by The Browns at 6:10 PM No comments:

Last week, we announced a Gallery One Art Auction would be held Friday, June 27, at the gallery.

How does a Gallery One Art Auction work, you ask???

Our auctions are informative and entertaining. They provide a great way for new collectors to learn about the current art world....and they provide seasoned collectors with great money saving opportunities. There is no charge for admission, no buyer's premium...and you can bid in person or on-line at www.galleryone.com.

It's fun and you may go home with a masterpiece.

BTW...Alan is an Ohio Licensed and Bonded Auctioneer...and I'll be at the podium, too.

That's all for now! NL
Posted by The Browns at 6:50 AM No comments: 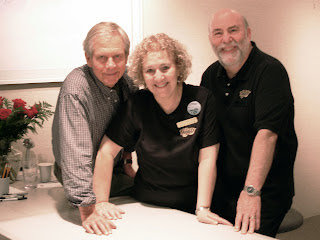 Sadly (for us), Bob left Sunday morning for Canada. As always, it was great having him visit to personally open an exhibition of his fabulous images. He spoke to a packed house on Saturday afternoon. His topic....getting kids back outside!

We really need to listen to him. Twenty-five years ago, he spoke of living green although I don't think he called it that back then. Now we are all trying to do so. Recently, he has added a plea for us to get our young people out in nature -a proven way to combat obesity, malaise, etc.

We can't thank him enough for coming to visit us. It is time away from his family, his studio and his "green" home.

That's all for now. NL
Posted by The Browns at 3:10 PM No comments: 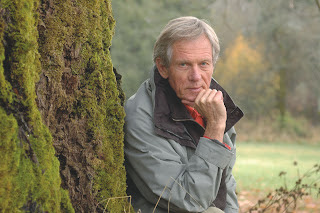 Twenty-five years ago, Bob Bateman first visited Gallery One. Sure, his work was outstanding. He brought wildlife imagery to a whole new level artistically. But as those works graced the walls of our gallery and the walls of our collectors, they spoke to us all. They tempted us to learn more about his wildlife subjects. They awakened environmental concerns in us all.
His "Coyote in the Winter Sage," one of his earliest print releases, has luckily been released now as a canvas giclee. As the coyote stands on a glacial ridge, we are reminded that the coyote is our North American wild dog. That masterful image might have been enough...but Bob had a message to convey. That was back in 1980 - thirty years ago - and Bob gave us something to ponder by simply including a crumpled beer can in the gravel terrain.
That image is powerful, artistic, compelling on its own....and a great decorating tool for our homes and work places. But like his 2008 release, "Global Warning," (showing the polar bear swimming endlessly looking for solid footing) and so many of his images through the years, the environment takes center stage.
As we drove to the airport to fetch Bob last night, I found myself trying to sort out his standing in this world of ours. Bob may argue with me....but, speaking of my lifetime, the music world is defined by Frank Sinatra and Barbara Streisand...of course, Leonard Bernstein and Pavarotti. The computer world is defined by Bill Gates and Steve Jobs. Architecture is defined by Frank Lloyd Wright and I. M. Pei. The movie industry by Alfred Hitchcock, Steven Spielberg and Walt Disney. And the art world is defined by Pablo Picasso, Andrew Wyeth and Robert Bateman.

That's all for now. NL
Posted by The Browns at 6:21 AM No comments:

Especially when we have an artist as famous as Robert Bateman visit us (he'll be here 10-5 this Saturday), we get lots of questions about personalizing artwork. Here is some information to assist the collector:

It is often rewarding to have a guest artist personalize one’s purchase. However, care should be taken lest such a personalization devalues the artwork. Consider that nearly all limited editions (whether on paper or canvas) have already been hand-signed by the artist. Perhaps, because of your fondness for the artist and/or because you wish to honor a special collector, you ask for a personal inscription...or a date.

Now consider that one day you want to sell the item. And there it is: an inscription to you or someone in your family...or even a date that is important to you...but meaningless to a would-be buyer. “Ah,” you say. “I would never want to sell this work of art.” But what if the item in question were Bateman’s Chief, released at $4800 in 1998 — now worth $20,000 and currently devalued because your name, date or message is on it!

Now for some great suggestions that leave the art work intact:

• Ask the artist to sign the certificate of authenticity or his/her bio, if available.

• If the work is covered with glass, have the artist sign the glass, the matting or the dust cover.

• On canvas works, the dust cover or the back of the frame can be safely signed.

BOB BATEMAN AT GALLERY ONE

Legendary artist and naturalist, Robert Bateman, will personally open an exhibition of his works and mark his 25-year-association with Gallery One on June 14. And are we excited!

Bob's first ever United States one-man show was at our gallery back in 1982. Born in Toronto in 1930, Bob combined his lifelong passion for nature and his talent for painting into a career that has made a lasting impact on both the art world and the environment. In the ‘70s and early ‘80s, his work first received critical acclaim. Today, his unprecedented popularity continues to expand. His works are found in many public and private collections and in several art museums.

Canada commissioned him to create that country’s wedding gift for Prince Charles. His work is also represented in the collections of Prince Philip, the late Princess Grace and Prince Bernhard of the Netherlands. 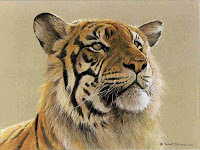 His museum exhibitions include one at the Smithsonian Institution that set attendance records. We were there with a planeload of Gallery One collectors for the private opening. What a thrill for us

Today, his honors, awards and honorary doctorates are numerous and include Canada’s highest civilian award. Schools bear his name and his work and philosophy are the subjects of several books.

Bob's art is a reflection of his commitment to the environment. He has used his art for fund-raising efforts which have provided millions of dollars for such causes, among them Kirtland’s Children's Schoolhouse Nature Park....just minutes from Gallery One.

His first limited-editions were released in the U.S. in ‘78. Hundreds of distinctive images followed, most selling out quickly and becoming sought-after by collectors, even as their prices accelerated. Today, many of his most sought-after images are available as signed and numbered giclee canvases. Several such releases will be featured at his June 14 Gallery One opening and Bob

will be on hand from 10 a.m. to 5 p.m. to personalize framed prints, books and posters.

He will present an informal lecture at 1 p.m. speaking of art and the environment. If you cannot join us in person where the world's largest display of Bob's images will "knock your socks off," be sure to check out his awesome body of work at http://www.galleryone.com/.

And by the way, now through June....get a signed Robert Bateman fine art poster with every purchase of a Bateman signed and numbered giclee or limited edition. (Our collection has never been better and includes many rare, sold-out works.) 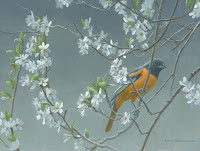 That's all for now. NL
Posted by The Browns at 9:41 AM No comments: 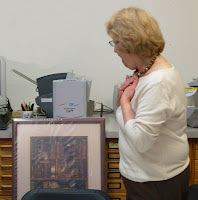 With the excitement of the Brian Davis show, we don't want to let an event pass without a mention. Sharon Westfall, our event coordinator for the last 12.5 years, has retired. She and husband Rich have moved south now that they've become empty nesters. Sharon's warm and efficient manner has facilitated shows and Masterworks exhibits as she worked with the artists securing their art and/or accommodations. We had a small farewell party for her and wish her and Rich all the best. She is shown here with a small token of our gratitude for her many years of service. Farewell, Sharon & Rich.
Posted by The Browns at 10:01 AM No comments:

What a weekend! The Brian Davis exhibition (it will hang thru June) was warmly received by collectors who universally agreed that his images were unbelievable. And Alan and I agree that in thirty-something years in the art world....no one does florals like Brian. It is truly an honor to represent his work. 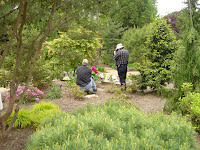 Brian was here for two whole days! The pix at the right is of Brian and Alan enjoying a friend's garden. At the left is Brian with Tom Buchter, Director of Horticulture at Holden Arboretum. And below (right) is Brian, obviously enjoying a beautiful Ohio day by a private lake. 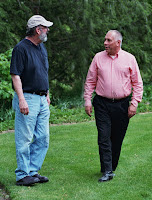 Regretfully, we sold out of Brian's books at Brian's opening...but a new supply is on order. The big art seller was "Resplendent Queen." And it is close to being sold out nationally. (It is pictured on the blog below.)

If you visited the gallery over the weekend, check out www.galleryone.com/davis_prints.htm. You may see your picture with Brian.

A special thank you from the entire Gallery One crew to Joanne Rita and the Collectors Editions team for making Brian's visit happen.CE prints, publishes and distributes Brian's works.

What's next? The Bateman exhibition opens on June 14....with Bob at Gallery One - in person.