Light up your imagination! 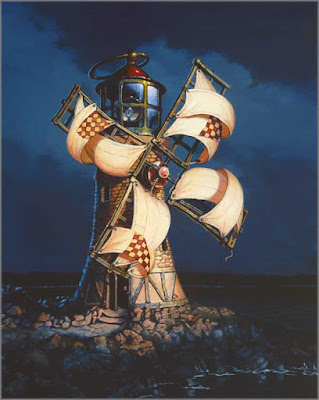 Giclées on canvas,
hand-signed by the artist

DEAN MORRISSEY
in person
at Gallery One December 1st & 2nd!

According to artist and author Dean Morrissey, The Great Kettles is an enchanted Chain of Islands across the Sea of Time. It is home to a number of magical figures: The Man in the Moon, The Mystic Mariner, Father Time, The Sandman, The Cloud Keeper, Trundles, giants, trolls and many more. Even the most familiar-looking objects are never what they seem in the land of the Great Kettles. Take for example, this combination lighthouse and windmill, with a handle on top.

The top is actually a portable lantern belonging to a giant named Mogg:

“Mogg set his lantern on this lighthouse every night to guide the fishing boats in. It is said that one time he waded out into the ocean to save a sinking galleon. He picked up the boat, put it on his shoulder and waded back to safe water before setting it down. The crew went wild!”

(From the 2001 book The Moon Robber by Dean Morrissey) 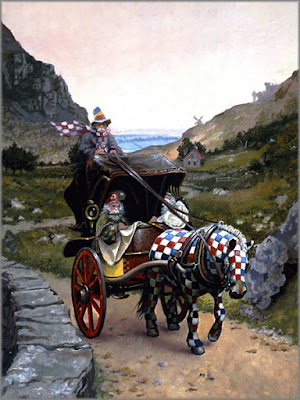 Did you know that the very first Checker Cab was from The Great Kettles?

Giclée on canvas, hand-signed by the artist 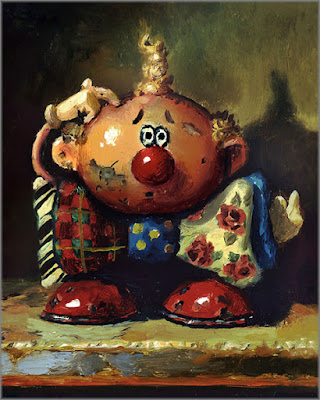 Ever wonder why that leaky faucet stopped dripping? Obviously, the Trundles took care of it while you were sleeping. (You’re welcome!)

Giclée on canvas, hand-signed
by the artist

Very few people have actually seen a Trundle although many people have them as boarders. Artist Dean Morrissey knows many of them and has even painted their portraits. Several of these are available at Gallery One such as the one shown above of Billy Blue Sky.

Trundles are magical little creatures. Preferring to stay out of sight, they sleep up in the eaves or in cabinet drawers. They are virtually invisible in a cluttered room. A fully-grown Trundle can stand up under a bed without hitting his head. Their purpose is a good one. They quietly go about helping their host in many ways. They sweep up in the middle of the night, and repair broken windows and leaky pipes.

As you can see, there is often a logical explanation for many unusual circumstances, all of which make perfect sense in the land of The Great Kettles and in the mind of Dean Morrissey.

Make plans to see Dean at Gallery One, Friday December 1st and Saturday, December 2nd!  And see more of his fascinating artwork at http://www.galleryone.com/artframing/morrissey.html

Click here for a special deal on figurines!
Coupon valid thru 11-08-17

Posted by Gallery One at 3:00 PM No comments: