How did Gallery One, a retail art gallery, become a proud supporter of Marilyn's Voice, an organization that rescues, rehabilitates and re-homes dogs rescued from dire circumstances?

The unlikely connection came as the result of someone doing the unthinkable in June of 2012:  A tiny 2-year old Jack Russell/Chihuahua was stuffed into a cat carrier with her male puppy and dumped along the roadside in Franklin County, OH. When found, both dogs were so starved, sick and filthy that the Humane Society thought it would be best to euthanize them. Marilyn’s Voice came to their rescue, just as they have done with hundreds of other severely neglected and abused puppy mill dogs.

Just prior to this, on Memorial Day, 2012, Gallery One owners Norah Lynne and Alan Brown had adopted Clancy. His picture had been posted on a Lakeland Terrier rescue website by a loving owner whose demanding schedule precluded giving Clancy all the attention he needed. Just 17 months old, Clancy soon became a regular fixture at the gallery, where he is adored and fussed over by the staff, one of whom missed him so much on the weekends that she decided to adopt her own rescue dog. One look at the beseeching brown eyes of “Daisy Flower” online, and it was all over. Daisy Flower would never be abandoned again (neither would her puppy who had already been adopted). Saved, loved and fostered, both had found permanent, loving forever homes, thanks to Marilyn’s Voice.

If you would like to consider adoption, contribute or receive e-mails from Marilyn’s Voice, read more at www.marilynsvoice.org. 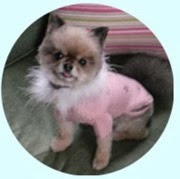 The dedicated volunteers of Marilyn's Voice are committed to improving the lives of severely neglected, abused and abandoned dogs from commercial kennels, puppy mills and other unfortunate situations. Marilyn’s Voice provides vital medical treatment to all of the rescues who are lovingly cared for in private foster homes until they are ready for adoption into screened and approved forever homes.

Marilyn's Voice, Inc. is a 501c3 nonprofit organization registered in the State of Ohio.
It was founded by Kristina Lange and named for Kristina’s tiny adopted rescue, Marilyn, whose vocal cords had been cut while she was still at a puppy mill. (“Debarking” is a cruel but all too common puppy mill practice to keep the large number of dogs quiet.) As a result, Marilyn’s trachea suffered irreparable damage and collapsed, leading to her untimely death. But in her brief life, Marilyn became a certified therapy dog, visiting and comforting patients at hospitals and nursing homes. Because of all she had silently suffered, little Marilyn was quick to empathize, instantly making others feel uplifted and loved.

Marilyn's Voice volunteers, are now, and will always be, her “voice” and the voice of other mistreated dogs who have suffered similar atrocities. Working to eliminate Ohio’s horrendous puppy mills by educating the public, Marilyn's Voice is raising awareness through outreach, protests and other events, in order to help individuals find responsible ways to acquire companion dogs.

Gallery One is home to two Lakeland Terrier rescue dogs, Clancy and Shayna. We are extremely proud to partner with Marilyn’s Voice to raise awareness through co-sponsored events and fund-raising. When artwork purchased elsewhere is brought to Gallery One for our recommendation, it is our policy to collect a minimum $10 donation for Marilyn’s Voice.

Together, we can help Marilyn’s Voice be the voice of change. To learn more about the many ways in which you can help, please visit www.marilynsvoice.org.

Thank you,
Gallery One
www.galleryone.com
Posted by Gallery One at 2:43 PM No comments:

To Shave or Not to Shave

What do these great men have in common? Beards! But there comes a time in the life of every such man when he is tempted (or encouraged by his wife) to shave it off.

Norah Lynne and Alan Brown founded Gallery One in 1974, and Alan has worn a beard for the entire time. His beard has been as much a Gallery One fixture as the artwork of Bateman, Brenders, Kinkade and Doolittle.

But lately, Clancy and Shayna, Gallery One’s Lakeland Terrier rescue dogs and official “Patrons of the Arfs™”, have been campaigning for their dad to sport the clean-shaven look.

To that end, Alan told Clancy and Shayna to poll a random sampling of the population, agreeing to comply with the consensus. Here are a few of the responses so far:
We want to know what YOU think: Should Alan Brown shave his beard off?

Send us your comments. If you submit the funniest reason for Alan "to shave or not to shave," you will win a $100 Gallery One Gift Certificate. Let your voice be heard! Reply to either

or Off with his beard! [e-mail]

Important Dates:
If the people have indeed decreed that Alan’s beard must go, it will be ceremoniously eliminated DURING the Morrissey show by a volunteer selected from the audience! Vote early, vote often! Founded in 1974, Gallery One has been voted Cleveland's BEST Art Gallery again!
Posted by Gallery One at 3:31 PM No comments: