See Phuoc on CNTV!
Posted by The Browns at 7:14 PM No comments:

An Update from Haiti 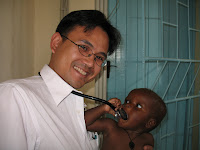 Phuoc Le, MD, MPH, is married to our eldest granddaughter, Erin. He currently divides his time between Harvard and Haiti where he works with Partners in Health. PIH has had a presence in Haiti for more than 20 years. ---NLB

I hope you’re all doing well. I’ve been in St. Marc, the epicenter of the cholera outbreak in Haiti, for a week now and wanted to share my experience thus far. I hope that after reading this you’ll continue to advocate for the people of Haiti in your everyday lives.

For the past three and a half weeks, the Zanmi Lasante/Partners in Health team has been providing 24-hour clinical care for those suffering from cholera. This is the area where the outbreak started nearly a month ago, and up to now we’ve seen many thousands of patients afflicted by this entirely preventable scurge. Cholera causes profuse diarrhea and vomiting, so much so that one can lose 20 lbs or more of weight in a matter of hours, which can lead to death within a day if not treated.

Working alongside our colleagues from Medecins Sans Frontieres (Doctors Without Borders), Cuban and Mexican medical personnel, and others, we have helped to care for the hundreds of patients who arrive daily, dozens of whom would ultimately need admission if intravenous fluids are required for their care.

My first night here we were all bracing for the worse case scenario with the coming of Hurricane Tomas. The ZL/PIH team did an outstanding job of preparing contingency plans, anticipating communications shortfalls, overflowed rivers knocking out bridges, and of course a sharp rise in cholera cases. We all slept in the ZL office at the hospital that night, taped our windows, and prayed for a weakened storm.

In the end, Tomas did less damage than expected, but there were certainly many areas that were flooded around St. Marc, leading to even less access to clean water, and ultimately we did see a surge in cholera cases, from under 200 new cases per day prior to the storm, to nearly 400 per day in the few days after it. A week after Tomas, the cholera numbers in St. Marc are stabilizing again, but nationally the epidemic is spreading rapidly, with now over 12,000 cases and 800 deaths.

Working the night shifts with two other volunteer medical providers, we first would do what we called “pulse” rounds. This was the most efficient way we could think of to evaluate 250 admitted patients and to immediately identify those in shock from dehydration. These were the patients most at risk of dying if not treated at once with fluids. We typically would find five or more cases of nearly pulseless patients during our initial rounds, and after resuscitating by placing two or even three intravenous lines with fluids wide open, we would add them to the list of two dozen or so of the most critically ill inpatients that we would make the day team aware of.

Most of the rest of the night would then be consumed with preparing discharges for the next morning, evaluating patients on the critically ill list, and assisting in the triage unit early in the morning when dozens of new patients would arrive at the first sign of daylight. Finally, before passing off the duties to the day team, we would do another pulse round on all the patients we intervened upon, and almost universally we would see a striking improvement, sometimes to the point that we would not recognize their newly filled-in faces, which just hours before had been so sunken that every bone was highlighted.

The number of deaths we’ve seen has drastically decreased compared to the initial few days of the cholera outbreak, but each death that I’ve witnessed and failed to prevent is a stinging reminder to me why I chose this career. It is the pursuit of justice and human rights that keeps us strong, and the spirit of the Haitian people that gives us hope. Thank you for continuing to support Partners in Health www.pih.org) and the brave people of Haiti.

pvl
Posted by The Browns at 5:57 AM No comments:

Wow! We're well into November already! Our October 22 James Christensen show was a rousing success and we continue to welcome fantasy art fans to his exhibit here at Gallery One. Check out these images and experience a bit of the excitement.


Last weekend was your chance to bring your best friend out to meet John Weiss. His art often features Golden Retrievers, Labradors, Collies, Poodles and Basset Hounds among other breeds and even cats! I hope you took this opportunity to discuss a personal commission for a portrait featuring your pet.

But these two shows aren't all we have in store. Our annual Kinkade Highlighter show will return Thanksgiving weekend and Dean Morrissey will return to draw with the kids on Dec. 3-4!

Speaking of Dean Morrissey -- and Alan Brown and Jim Daly -- We are ecstatic to announce the release of our own incredible, high quality giclees which are printed IN HOUSE using the latest giclee printing technology along with inks and canvases of the highest quality. Giclees are expertly coated with a UV protectant to extend the image life and provide a water-resistant surface. That's why we can guarantee your satisfaction! Click the artist names. You absolutely MUST see them to believe it.