Hello again! We’re your humble Patrons of the Arfs, Clancy & Shayna, with more about the “past lives” of some well-known artists. Read the descriptions below and see if you can identify them!

This artist studied Biology in college. Her courses gave her an immense appreciation and deep respect for the power of living things as seen in the individual cells of plants and animals.

Although she earned her BS, she chose not to pursue science as a career, but instead went on to earn her Master’s in Art History. Today, her fascination with the transformative nature of flowers is evident in her radiant paintings. Using an Old Master’s technique, she layers oil glazes over an opaque underpainting. She says: “There is something truly celebratory about flowers in sunlight. Light invests them with energy and liveliness. Their transitory nature makes the moment an occasion that deserves to be savored and remembered with attention and care, drama and boldness.”

She has won numerous awards and honors for her resplendent artwork. In addition to being a fulltime artist, she also teaches art and has authored the book, Classic Still Life Painting. 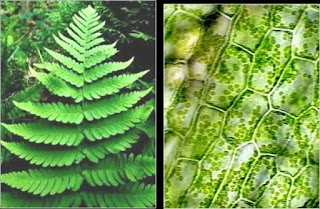 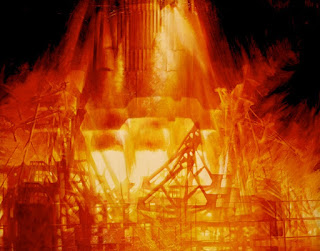 The dimensions of this artist’s work were as vast as the wild, wind-swept plains of the West, as infinite as outer space and as small as the historic scenes that he captured on more than 30 postage stamps for the U.S. Postal Service.

A master of both oils and the pencil, he depicted the mountain men and trappers of the American West with the same sense of history that had guided his hand when he and seven other artists were invited to illustrate early space missions for NASA’s Fine Art Program. Wanting more than a factual record of events, these artists were told: “NASA is commissioning your imagination… Artists should be key witnesses to history in the making…the truth seen by an artist is more meaningful than any other type of record.”

Although diverse in subject matter, all of his paintings had a central theme in common: man at the threshold of a new, unknown frontier. This artist, who painted Neil Armstrong’s boot stepping into the dust of the lunar surface, also painted those largely forgotten and unsung heroes, the North American trappers of the early 1800's, who blazed trails through lonely mountains and along unknown waterways.

He stated: “I find my inspiration in all the life that surrounds and envelops me, from the evolution of man and his works, to the timelessness of the rocks, the trees, of man, his land, the sky and the sea.”

Who was this artist? 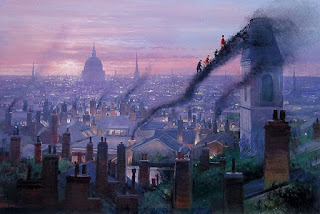 Born in Great Britain, this artist was a pilot in the Royal Air Force during WWII, where he met his wife, an American nurse.

After the war, he came to the U.S. at the invitation of Walt Disney to work as a matte painter, creating elaborate backgrounds on glass in front of which the live action was filmed. Once the scene was shot, the glass was washed down to be reused for other scenes. He also created Oscar-winning special effects, such as the wavy smoke staircase seen above, in his recreation of Edwardian London for the Walt Disney classic, Mary Poppins. The artist left “holes” in the paint, through which he shined light to give the impression of nightfall with lights twinkling on throughout the city.

As a fine artist, his paintings and prints of powerful panoramic landscapes and seashores express both the magnitude and the delicacy of nature. He called his method of painting "impressionistic shorthand," referring to his use of broad brushstrokes to give the impression of detail. Can you name this legendary artist?

Watch for the answers in our next blog!