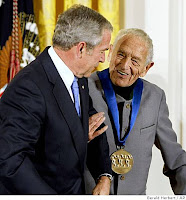 Andrew Wyeth, the renowned American painter, died January 16, 2009. The photo at left shows the famed artist with President Bush as he receives the 2007 National Medal of Arts.

The art community is mourning the death of a legend.

Andrew Newell Wyeth (born July 12, 1917)was primarily a realist painter. He was sometimes referred to as the "Painter of the People," due to his work's popularity with an adoring American public.

He was the son of the illustrator and artist N. C. Wyeth, the brother of inventor Nathaniel Wyeth and artist Henriette Wyeth (Peter) Hurd and the father of artist Jamie Wyeth and Nicholas Wyeth.

Wyeth's favorite subjects were the land and people around him - both in his hometown of Chadds Ford PA and at his summer home in Cushing ME.

One of the most well-known images in 20th Century American art is his painting, Christina's World, currently in the collection of the Museum of Modern Art in New York City.